It’s October and school holidays so as usual we planned a holiday somewhere in Europe, this time a sort of last blast of Europe before we leave for Australia in January. The plan was to take me to Paris then Bordeaux, San Sebastian, Porto and Lisbon, home via Barcelona. Now yes this was a tad optimistic considering we only had ten days to do it and we would be driving… Now the Australian camp thought it would be just like driving from Perth to Port Headland but with a few more villages in between… the New Zealand contingent were equally gung-ho: “how hard can it be, it’s just a drive” Grumpy-Human stated!

First problem: Me, it seems most hotels in France and Spain were not terribly interested in my furry self in their hotel rooms. Hey Germany was way friendlier on this so I don’t know what their problem is. Anyway hotels willing to give my good self a roof were found if not a tad more expensive and in odd locations.

Second problem: Me again. Sadly to get around Paris we would need to use the Paris Metro (Subway). Now dogs are aloud if they are carried in a bag! I could see Curly-Human sizing me up with some huge shopping bag with a hole cut out for me head. Nope not happening, I’m not going to be lugged around like groceries.

Third problem: Yep, me again, this time it was our final destination Lisbon. We were visiting our good friends who recently moved there. The problem was their Humans have dog allergies and the house is not suitable for dogs anyway. After much searching and great assistance from local friends we found a couple of Lisbon dog kennels. Now I’m not a great fan of these places and Lisbon kennels sounded like a big unknown to me!

So in the end my stand-in Humans were roped in to kindly babysit me at home so yet again I missed out! Well I had a great holiday of my own too. My stand-in Humans are now well trained and much easier to score treats from. Psst… they even let me sit on their laps… don’t tell my Humans…They do however go for a lot of really long walks though and as you guys know I’m not much into a lot of walking, kinda like my home patch. One walk a day is good enough for me, two at a pinch. Hey they even run on these “walks”, go figure!

It turns out my family had a great time although as I thought, the itinerary was adjusted a bit just to be sensible so Porto and Barcelona were ditched. There was a huge amount of driving and boy did they look weary when they arrived home. Two ten hour drives from Lisbon to Frankfurt with an overnighter in Bordeaux, whew! Pleased I didn’t go now, I’ve never been a fan of The Car. A 5000 kilometre (3000 mile) round trip, need another holiday I think!

Here are a few snaps from my Humans holiday sans me…

Thank god I’m not going, they don’t have room for me anyway!

Up the Eiffel Tower in Paris

Me sampling a cocktail or two… 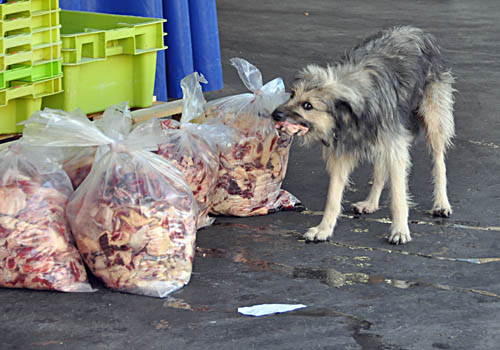 This just cracked me up when my Humans showed it to me. A stray dog spotted in Bordeaux behind a food market. He has just scored the biggest bags of treats ever! My hero mate!

My stand-in gobbling the famous Portuguese pastel de nata (custard tarts to you and I) in Lisbon, lucky thing…