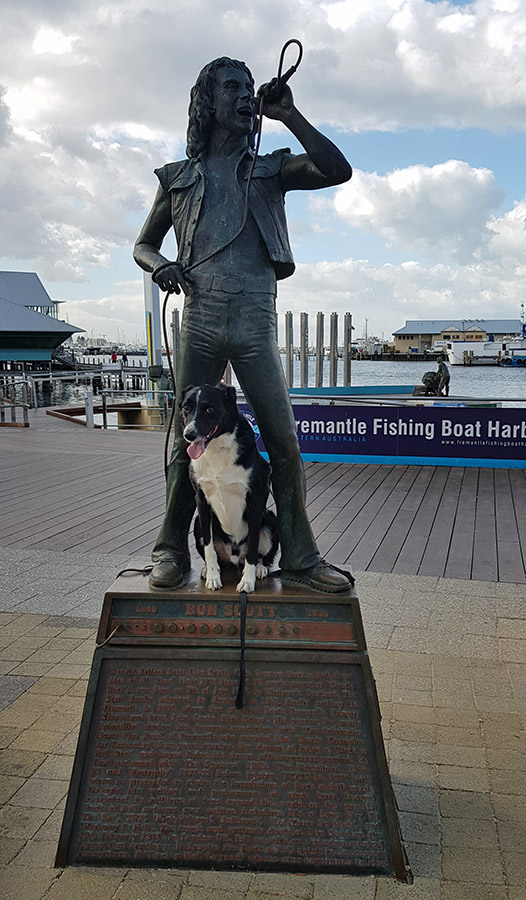 It may surprise you guys to learn that I am quite fond of music, in particular Rock music. One of me favs is “Who Let The Dogs Out“ by Baha Men, a bit of a cliché for us dogs I know but you gotta like such deeply meaningful lyrics as:

Anyway, movin on, another great band I’m a great fan of is AC/DC and my absolute favourite is their song “Highway to Hell” and I have a story for you about that later. Check out the original music video on YouTube

But did you know there is a connection with this song to me adopted home of Perth, Western Australia? I bet ya didn’t know that the road “Highway to Hell “ is real and is the nickname for a road near to my house called “Canning Highway”.

The reason? Bon Scott AC/DC’s frontman grew up around Fremantle. Sadly he died back in the ancient history days of the 1980’s. Released in 1979 “Highway to Hell” was the final album Scott worked on. He would often walk from Fremantle along Canning Highway via the Leopold Hotel and on to the Raffles Hotel, both of which in their day hosted some truly legendary performances from AC/DC amongst others.

Canning Highway a.k.a. Highway to Hell stretches from the Containbow in Fremantle (see my blog on that iconic fixture) all the way to the Art Deco Raffles Hotel and beyond.

Now the fun bit I’m dying to tell you guys and especially anyone planning to be in the Perth region in March, 2020 is, as part of the Perth Festival, the southern part of Canning Highway (one of the busiest roads in Perth) will be closed to cars .

This Highway to Hell will be transformed into a 10km entertainment strip as a tribute to AC/DC. There will be live bands some featuring AC/DC and other music of the 1980s towed along on flatbed trailers. I hear there may even be a reunion of one of my other favourite 1980s Perth bands the Jam Tarts. I would love that!

There will be roving performers, food and markets along with plenty of dog friendly space for picnics too. More info on the festival here.

I can’t wait and of course next March I will post me pickies and tell you guys that can’t make it, all about the day!

Now while I’m no fan of Yoda dog costumes… can someone get me an AC/DC shirt that fits me! Maybe on that day someone will be selling em…, himmm…, wait… I feel a market opportunity coming on.